Data collection is not so difficult, but starting printing calibration 3DBenchy ‘s is a bit to complex to start with.

I do not know how much impact the filament force sensor in this build has on the printing properties and measured values, but is certainly not neutral.
The distance from coldend to nozzle is extended by the sensor with 42mm and works for force/vibrations as a lever , but also bending of the load cell will be transmitted to the nozzle because that’s the way of measurement of the applied force.
There are other full bridge load cells with a much smaller build as in some luggage scales which may be more easy to integrate in the extruder body later and a pair (two) to reduce the motion in only slight movement in z-axis direction.

At this stage, there are still a large number of combinations for the extruder, even we start with only 5 different feedstock gears , two transmissions ( herringbone / GT2 ) , two different diameters, four filament types ( PLA , ABS, PETG, HIPS) two different hotends , 3-5 nozzle diameters and a whole bunch of parameters such as temperature, acceleration , etc.

Would give a big armada of 3DBenchy’s.

First , limit the possible combination with starting only with ABS 3mm .
ABS 3mm filament is the only filament type were I more colours from same production batch date have, September 2014, a bit old and what is already noticeable at printing.
A rule of thumb for me is to use ABS filament within 2 years after production date , the experience is that after 3 year it hardly anymore printable is, but the quality of filament improves also every year.
The hope is that the filament sensor here here also helps, so that filament is consumed in time

Limiting the nozzle diameter for the time to only 0.4mm reduce also.
Based on this and this blog, I have calculated a maximum continues flow for 100mm/second.

In practice, there are not often long periods (30 seconds) of continuous flow during printing unless you print spiralized vases and cylinders, but it is a first target 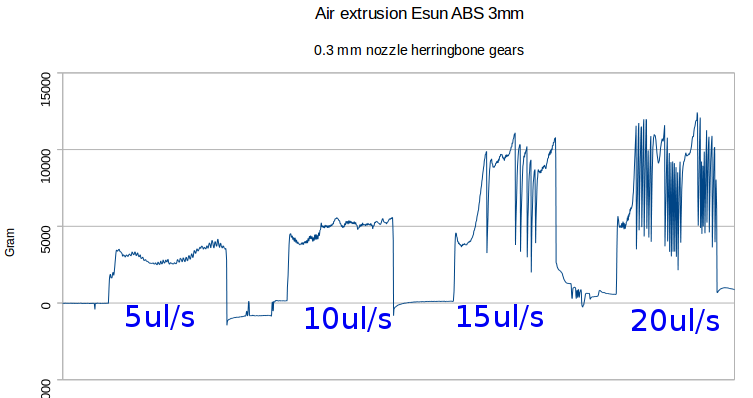 When the driving forces go above 10kg , the first slip niggles appear, the printed small herringbone gear has only a single setscrew which slips and by use of a pit or small flat D profile on stepper motor axis, the small gear breaks after some time. From experience I print by default already 2-3 small gears to one large gear.

The herringbone gear transmission is replaced with a 6mm 188mm GT2 94 tooth closed timing belt (16Tooth pulley / 80 tooth printed big gear for M5 head bolt) and gave no problems , despite a couple of times we were over 20kg.
The used Wantai 42BYGHW609 stepper motor is too strong and the filament slips before it is clear that steppen motor is lossing noticeable steps and how this looks on chart for that we need to redo this with a smaller gear ratio or  weaker stepper motor.

Despite same production batch date, there are obvious differences between various colours, with ABS dark colours which the most force needs and with black being the most divergent.
All measurement are with the same temperature setting of 250C, a different approach might be the optimal temperature of this calibration print for ABS but with an average flow of only 2.5 ul/s the layertime is already below 15sec. 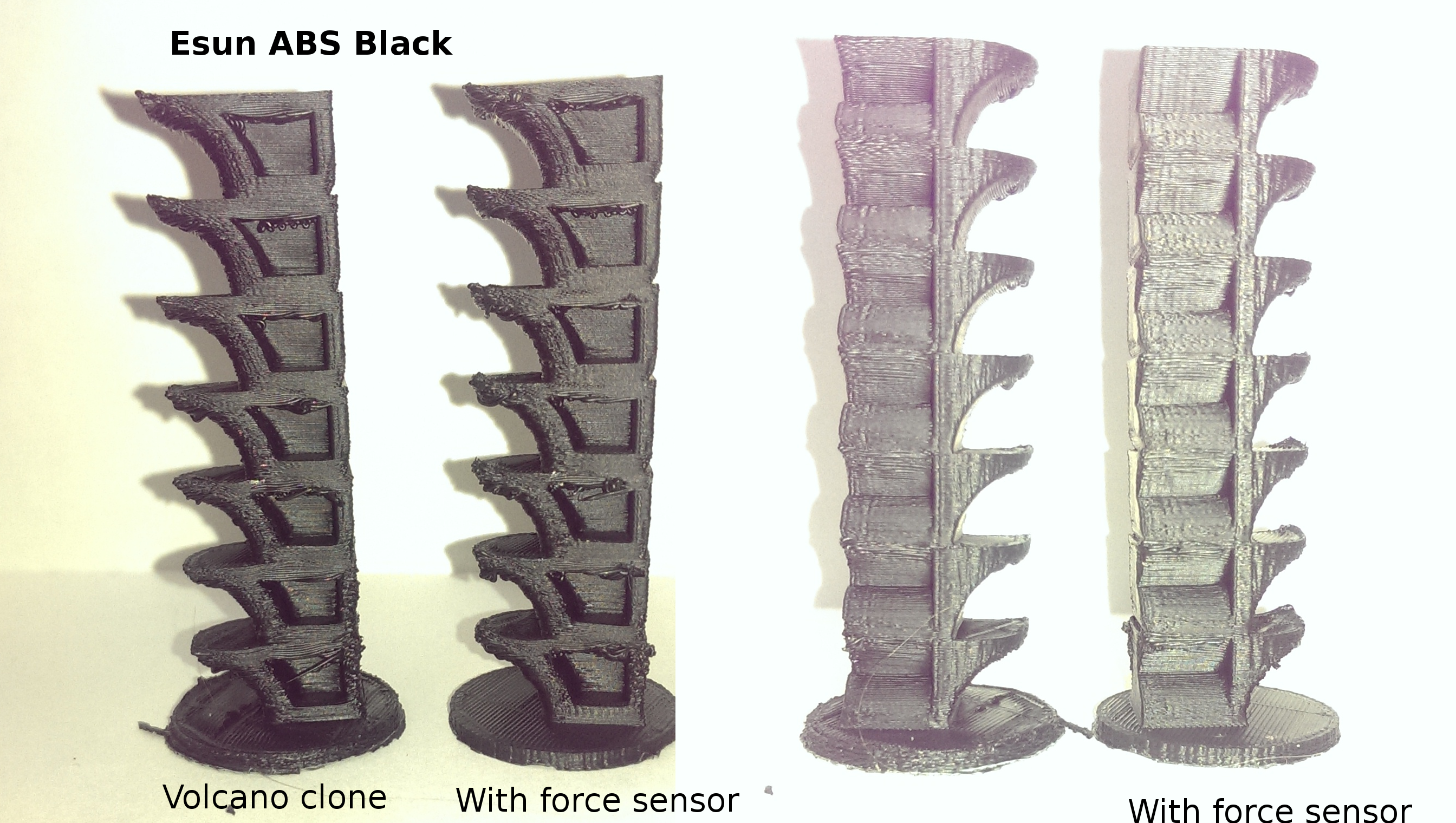 There are some difference, but hardly to see at this low speed, also are there other visual items with the selected filament. 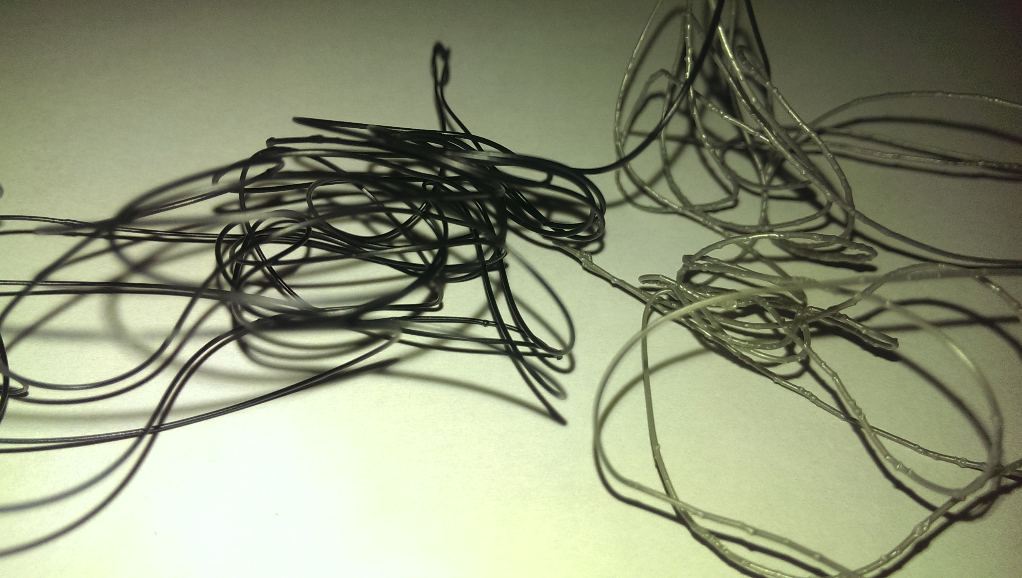 Esun ABS silver(left) needs the least force in the graph above, but apparently has also the most of low boiling additives which gives a very inconstant extrusion quality at higher flow rate
This is not the sensitive to moisture (hygroscopic) from ABS, like all filament spools these go direct from vacuum package into a drybox with silica for use and ABS silver and black shared all times the same box.

Above 10 ul/s, it is not only mechanically but also heat transfer can be an item.

ABS has considerable advantage of a longer melting zone , but also more (half) molten mass must be moved which can have influence on the acceleration.

The feedstock gear’s just like all other parts for extruder are from eBay, with the exception of the T26 (26tooth) feedstock gear all other have only one grub screw and where two grub screw is desirable.
Slipping feedstock gears may also be less inconspicuous at first as MK7-02 (light blue) in the above chart, blackening the shaft with a stylus is helps so that slip is visible on the material shaft (M5 DIN931 hexagon head bolt) also afterwards

At higher flows, there is a pressure peak in front, a clear indication it’s more difficult to get the semi-molten mass in motion
Especially for PETG, PLA is this much higher then for ABS and HIPS and the long melting zone of the volcano clone has so lesser benefits these two.

I can do some minor adjustments before the 1.75mm filament and redo the first comparison between the feedstock gears, but until now no big differences.

Only that T36 still sliding , which I have missed during measurement.

Changing the Mendel90 sturdy horizontal X-axis to a vertical orientation, requires also another way of mounting  the direct drives extruder’s to the X-carriage, the ultimate greg’s wade’s geared extruder has both,  the vertical is firm but not particularly rigid.

Most of the weight comes from the stepper motor, located far from the attach-point and only a small force is already sufficient for movement/vibration of the nozzle in the Y-direction to the X-carriage.

Adding a third mounting point to the X-carriage improves this 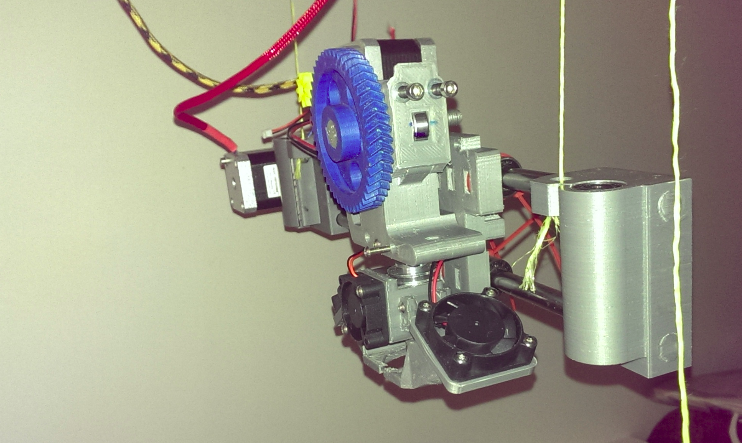 With proper choice of stepper motors (weight) of direct drive and X-axis, is the center of gravity on the line between both Z-axis smooth rods with the nozzle only 20mm in front of this line

A proximity sensor can be attached to the each direct drive body in place one to the x-carriage, but all by all it requires a lot of X-axis space and with keeping open an upgrade to a larger heatbed (300x200mm) needs quick 45-50cm smooth rods, a length not preferable to down-grade the 10mm Mendel90 sturdy smooth rods to 8mm

The required X-axis length can be significantly reduced by rotating the extruder body 90 degrees (like i3 Rework , L3K) and limiting the length two LM10UU bearings (65mm).
The x-carriage of the 3in-1out has already as test, plastic variant for LM10UU (IGUS-style, next SF-1 10x12x?), which has the advantage ~ 45 grams less moving mass for the x-axis, which benefits the acceleration and faster printing.

Greg’s Wade’s geared extruder turning 90 degrees is a big modification and there are many options as also a few alternatives for hobbed bolt are included. 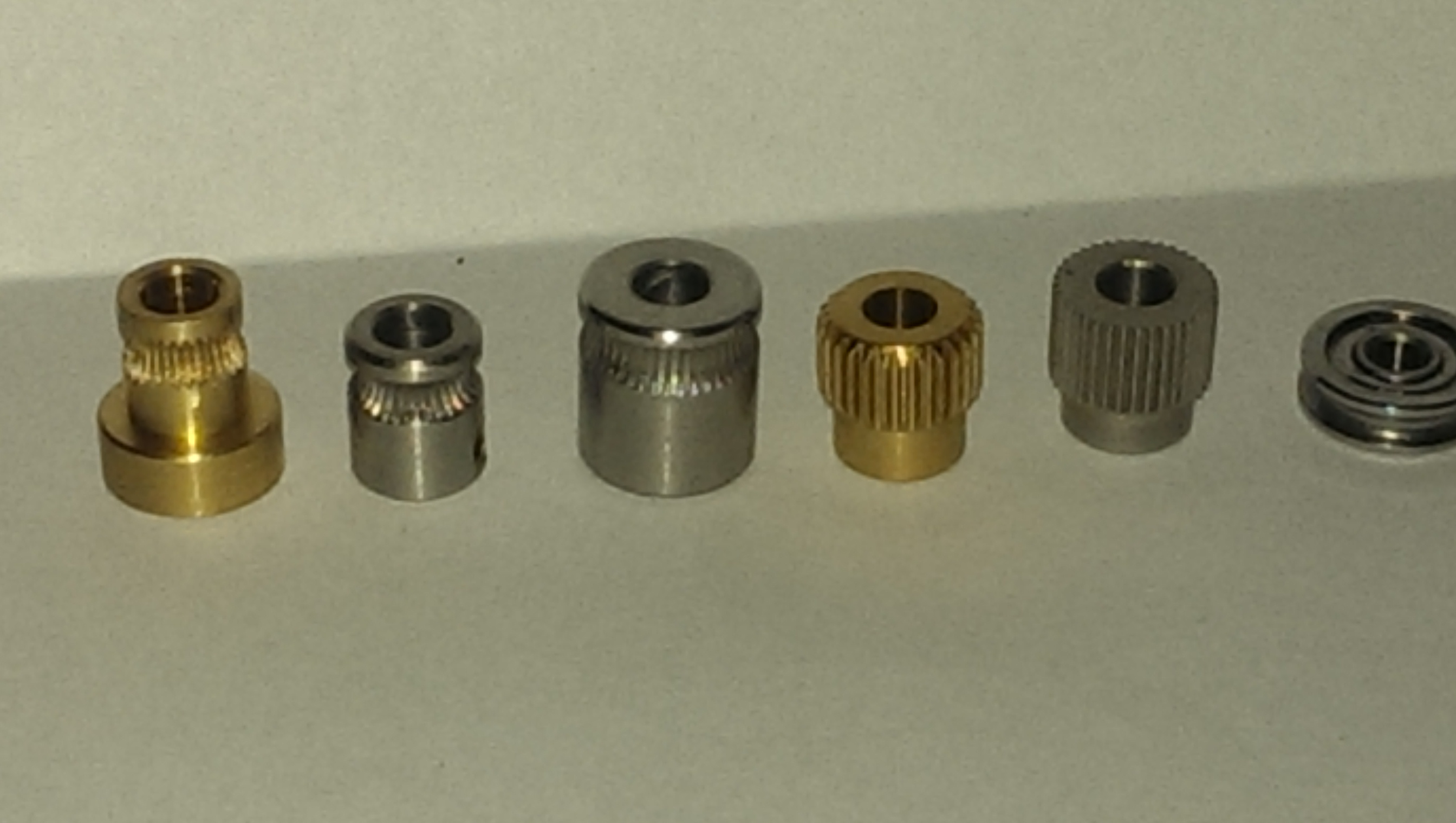 There is a slight preference to stay close to the effective diameter of a hobbed bolt, keeps the possibility open for all direct drive extruder having the same steps/mm, with only a customized different transmission ratio’s (1:3 – 1:5 ratio).
Indirectly it’s, also a preference for small effective diameter feedstock gears since these need lesser force and make it even easier to swap the standard NEMA17 stepper motor for a pancake or NEMA14 stepper motor, which is another 150-200 grams less mass to move during printing.

For remote Bowden drives, the weight of the stepper motor is not so important and I also looking into other types, like friction drives (Vaeder V Struder / Gunstruder) 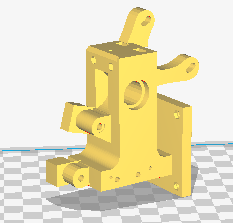 The first draft is made with the most major modification tailored for each feedstock gear on basis of the openSCAD 7th Gen Greg’s Wade’s geared extruder sourcecode.

The first basic printing data can now be collected for dropping some feedstock gears and modifications.

The use of a load cell for adjustment and help by modifications is already years known (Airtripper , Prusa)

The build is simple 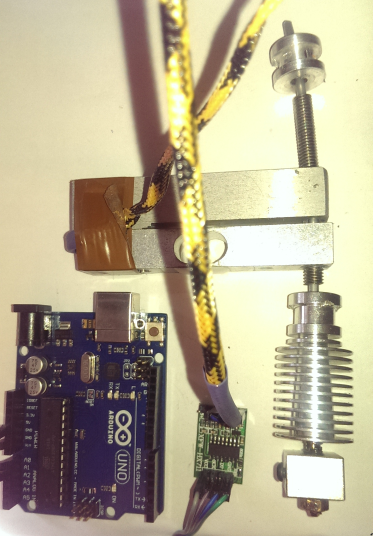 The J-head/E3D mount is connected with a piece of M6*26mm (3mm filament V5 thermal break clone) on one side of aluminium bar and on other side two M4 screw holes for the load cell.
From load cell is one M5 thread replaced by a M6 which lines out with the M6 in aluminium bar and provides with another V5 heat break clone the connection with the heat-sink.
(heat-sink, bore 3.2mm, Bowden type for M6 PC4-2 male push-in)

Instead 3.2mm hole through, are 1,75mm M6*26mm with liner type heat break used and 2 pieces 3mm OD 2mm ID PTFE tubing from extruder gear to the air-gap and from air-gap to 1.75mm nozzle.

For more accessibility special with the 3-in 1-out nozzle changed I the horizontal orientation from the original Mendel90 sturdy to a vertical orientation, with a modified and mirrored Prusa Vanilla X-axis for 10mm smooth rods and 50mm spacing.

The X-carriage is a first draft (work in progress) and has for moment 3×2 mounting holes for M3 screws 30mm apart. Bottom (proximity sensor holder), the middle can be used for Prusa i3 mounts as the cooling shield in picture above or a standard Greg’s -Wade’s geared extruder or a modified here.

Over time, there will be more versions of X-carriage added, with something for cable management, a load cell replacing the z-endstop………….

Using a single nozzle with three filament feeds like a diamond hotend or a clone it’s possible to create a rainbow of colours with Repetier firmware V0.92.9 mixing nozzle option and RAMPS 1.4 with an extra external extruder driver on AUX1.

The filament goes in on fixed positions in the hotend and actual there is no active mixing in the nozzle, resulting that the print direction influence has on the final colour.

Because the melted filament close to the wall, lesser or not mix with the others for a specific colour mix

The difference is more than only a small colour change, these cubes were printed same time with same mix setting [33%,34%33%], one with the walls parallel to XY and the other 45 degree rotated

The filament extrusion-streams leave the nozzle more or less as striped toothpaste an tube and it is predictable by print direction which filament colour will be dominant on the outside with solid colour filaments.

The above prints were all with 1.75mm eSun ABS+ (light blue, magenta, yellow).

2013 was the start for my first 3D printer, only with some experience with a DIY build CNC mill (2009), with the desire as far as possible a homebrew printer, to learn from.
The choice was Mendel90 sturdy

However, right from the start with some small changes for more mechanical resolution as eg 42BYGHM809 0.9 ° stepper motors for XYZ

The X-axis pretty soon replaced for the improved version, another X-carriage for 3mm mounting plates with various extruder’s on it, for quicker switch between 3 and 1,75mm filament

Regular switching between different extruder’s, means also re-adjustment Z-endstop and steps/mm by filament diameter and a proximity sensor on the same 3mm mounting plate or integral to extruder-body only when changing the nozzle.
But the space is limited between the bars by horizontal orientation and there are also some cooling needs (PLA, ABS, PETG)

Vertical orientation as the Prusa i3 offers more options to quick change the complete head from mono direct feed to Bowden multi feed, without many other setting changes for an simple network 3D printer
A multi-filament one nozzle hotend as 3in-1out is a great three colour nozzle with possible a rainbow on colours, but without active mixing, helps that not with “stripped toothpaste” effect.

By changing the X-axis there are a lot of options/choices with DIY.
Quicker printing, another way auto-zero Z, timing belt transmission with custom big-gears for same steps/mm filament, and so on